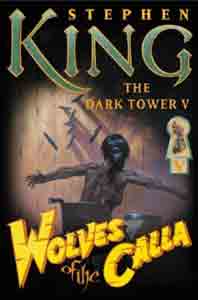 Wolves of the Calla (The Dark Tower, Book 5)

Synopsis of Wolves of the Calla (The Dark Tower, Book 5)

Roland Deschain and his ka-tet are bearing southeast through the forests of Mid-World, the almost timeless landscape that seems to stretch from the wreckage of civility that defined Roland's youth to the crimson chaos that seems the future's only promise. Readers of Stephen King's epic Series know Roland well, or as well as this enigmatic hero can be known. They also know the companions who have been drawn to his quest for the Dark Tower: Eddie Dean and his wife, Susannah; Jake Chambers, the boy who has come twice through the doorway of death into Roland's world; and Oy, the Billy-Bumbler.

In this long-awaited fifth novel in the saga, their path takes them to the outskirts of Calla Bryn Sturgis, a tranquil valley community of farmers and ranchers on Mid-World's borderlands. Beyond the town, the rocky ground rises toward the hulking darkness of Thunderclap, the source of a terrible affliction that is slowly stealing the community's soul. One of the town's residents is Pere Callahan, a ruined priest who, like Susannah, Eddie, and Jake, passed through one of the portals that lead both into and out of Roland's world.

As Father Callahan tells the ka-tet the astonishing story of what happened following his shamed departure from Maine in 1977, his connection to the Dark Tower becomes clear, as does the danger facing a single red rose in a vacant lot off Second Avenue in midtown Manhattan. For Calla Bryn Sturgis, danger gathers in the east like a storm cloud. The Wolves of Thunderclap and their unspeakable depredation are coming. To resist them is to risk all, but these are odds the gunslingers are used to, and they can give the Calla-folken both courage and cunning. Their guns, however, will not be enough.

Reviews of Wolves of the Calla (The Dark Tower, Book 5)

King exudes such craft, control and playfulness with pop culture (including his previous non-Dark Tower Books) that even readers new to the Series will be easily drawn into the tale. -- Gavin J. Grant, Bookpage

Now dig in, 'cause King's latest in this seven-course banquet - the last two are finished and due out next year - is a lip-smacking, brain-filling repast. -- Denver Post

It's a maddening exercise in interminable dawdling. -- Bruce Westbrook, The Houston Chronicle

King is at a dangerous crossroads with "Wolves of the Calla." -- Michael Berry, The San Francisco Chronicle

...a futuristic-western narrative that doesn't pack the punch of The Seven Samurai (explicitly referenced, along with The Magnificent Seven ), but provides the usual twists and thrills. -- Gwyneth Jones, The Guardian

Say what you will about Stephen King, the man can spin a yarn, and a great one at that. -- Phaedra Trethan, The Philadelphia Enquirer

The latest adventure of Roland and company, Wolves of the Calla, is a solid addition to the fantasy Series. -- Todd Camp, The Fort Worth Star-Telegram

If you have yet to jump onto the epic that is The Dark Tower, the time to do so is now. -- Joe Hartlaub, Bookreporter.com

Wolves of the Calla is the most focused episode yet, moving this epic story both forward and sideways and it shows, in no uncertain terms, that King is still right on top of his game. -- John Berlyne, SFRevu

Loyalty, friendship and the ability to choose are the ultimate themes of the Series, and this Book furthers those themes admirably ... though it would have been preferable if Wolves of the Calla could have been read as a stand-alone story, as well as part of the Series. -- Mark Graham, The Rocky Mountain News

Overall, worth reading, and I would imagine those who have followed these characters through earlier Books will enjoy this Book. -- Paul Hanley, SF Crowsnest